Your bags are packed, and you’re getting the holiday jitters; it is time to enjoy the sunshine or skiing that you have been looking forward to for months, nothing can spoil it for you…

However, there are daunting statistics that hundreds of thousands of passengers are injured each year from incidents on an airplane.  Many individuals think they are not entitled to damages for these incidents as they are 35,000 feet in the air, but you can! 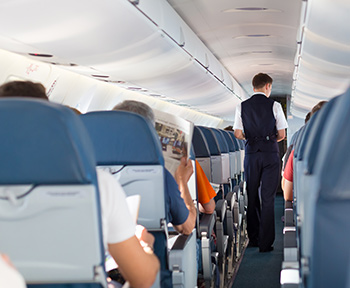 What Type of Injuries Can Compensation be Claimed For?

There are many different injuries that can be sustained on an airplane which enable you to claim compensation for:

What is the Montreal Convention?

If you are injured whilst on route to your dream holiday, honeymoon or business trip via an airplane, then the Montreal Convention safeguards you. It favours the passengers of the airplane and implements a strict liability on the carrier.  Therefore, you do not need to worry about proving that negligence occurred on the airplane, as usually the accident itself will be sufficient.  The following shows some of the carriers that the Montreal Convention applies to:

Do any limitations apply?

Although the Convention does favour the passengers, there are a number of elements that you should be aware of when trying to claim compensation for an accident on an airplane.  Usually, in Personal Injury cases, there is an allowance of three years to issue proceedings from the date of the injury or knowledge.  However, an injury sustained whilst in the air only has a two-year window for claims to be issued.

Furthermore, under the terms of the treaty, there is a threshold amount that is recoverable per passenger for injuries, which caps claims at £100,000. This is to safeguard the carriers to some extent, as in these situations there is a strict liability application as mentioned above.

To find out more about claiming under the Montreal Convention, contact an experienced personal injury solicitor by searching through Solicitors Guru today.

Common Risks in a Barbershop

The Agony Of Mesothelioma

Knocked Off Your Bike?

Sexual Abuse in Football – Can Compensation Be Claimed By The Victims?

Claiming for a Personal Injury at Work

Claiming for Slips and Trips

Making a Claim for Whiplash