The world was shocked by two major events in 2016, the election of Donald Trump as President of the United States and Brexit. Many predictions were made about how Brexit would cause the British and EU economy to collapse. The pound did fall dramatically, in fact, in October 2016, it fell to its lowest level in 31 years. However, foreign companies such as Facebook and Google continued to invest in their London operations, consumers continued to spend, the economy grew by 0.6 percent in the three months to September 2016, interest rates remained low and employment high.

Experts predict the outlook for 2017 to be grimmer, especially after the end of March, the self-imposed deadline Theresa May has given for triggering Article 50.

So what does the economic outlook say for 2017?  Here are some of the most common forecasts.

Household spending rose at a quarterly rate of 0.7% in the third quarter, but at the same time, household incomes adjusted for inflation fell 0.6% - the biggest drop since early 2014.

Savings also dropped to the lowest levels in eight years as families ate into their nest-eggs.

Sterling has fallen more than 10% 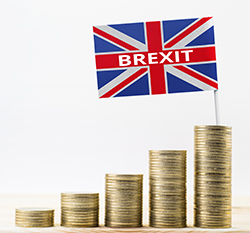 against the US dollar since June’s vote, and while some retailers have raised prices, others are expected to wait until January when the sales season finishes.

Meanwhile, the Bank of England forecasts inflation will rise to 2.7% within a year from its current level of 1.2%.  According to pay data company XpertHR, wages are unlikely to match the increase, further squeezing household incomes, some to breaking point.

The cost of a hard Brexit

A hard Brexit, a reference to Britain leaving the EU and losing access to the single market and all the benefits this entails, would result in an estimated £66bn per annum loss for the UK Treasury and could reduce long-term GDP growth by up to 9.5%.

Job losses and the contraction of businesses, both large and small would swiftly follow.

Because Theresa May is playing the Brexit negotiation strategy close to her chest, no one has much idea of the kind of Brexit the UK will have.  This ambiguity is likely to lead to greater business uncertainty as the March deadline for triggering Article 50 draws ever closer.

The chance of an early election?

Following the decision of the Court of Appeal which stated that Theresa May had to inform Parliament before triggering Article 50, there was some talk of an early General Election being on the cards.

It is likely that the current Conservative government would increase its small majority if an early election was called, so unless the triggering of Article 50 become highly contentious, which is unlikely as all the major parties have pledged their support for the move, an early election is improbable.

It is difficult to predict what will happen in 2017 when we formally leave the EU.  Many of the predictions made regarding the consequences of the referendum never came to pass.  We will have to wait and see what the New Year brings and how the sterling and markets react to negotiations over the next two years.

If you require any legal advice regarding Brexit, please search Solicitors Guru today.