One 3rd November 2016, three of Britain’s top judges in the High Court ruled that Theresa May cannot exercise royal prerogative to trigger Article 50; Parliament must make the decision.

The verdict caused violent reaction amongst the British media, who have been heavily criticised for attacking the three judges who made the ruling.

Who brought the case to court?

The lead claimant was an investment banker who was born in Guyana but has lived in the UK for 41 years named Gina Miller.  She engaged top London law firm Mishcon de Reya to bring the legal challenge to the triggering of Article 50 to Court.

The inclusion of Article 50 into the Treaty on European Union (TEU) by way of an amendment in the Lisbon Treaty provided the EU with its first formal mechanism for a Member State leaving the bloc.  Once it is triggered, a two-year negotiation period begins where the remaining 27 EU nations and the country which is exiting the bloc work out the terms for the departure.  This includes decisions regarding what happens to various citizens residing in the nation leaving, balancing up the payments for EU projects and an interim trade agreement to be used whilst negotiations for a new trade deal are hammered out (which could take many more years to complete).

What were the key grounds raised and what did the court decide on each?

The single question for the court was whether the royal prerogative gave the government power to notify (under Article 50(1) TEU) that the UK was leaving the EU, or did the government require the express support of Parliament before doing so.

What did the High Court decide?

A panel of three of our most senior judges have ruled that in order for the Prime Minister to trigger Article 50 and leave the EU, she will need to have a vote in Parliament to allow that to happen. 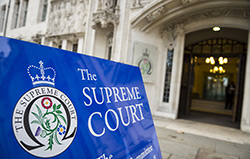 The government cannot ignore the court’s decision.  Leave has been granted to appeal the ruling to the Supreme Court in December, with a verdict likely to be released in January 2017.

All 11 Judges of the Supreme Court will sit to hear the case, which has never happened in the Court’s history.

If the Supreme Court upholds the decision what will be the repercussions?

Most MPs have agreed to support the move to invoke Article 50 if the matter is put before the House. As such, it is widely believed that Brexit is likely to still go ahead; however, the March 2017 deadline may be missed if Parliament insists on long drawn out debate on various exit issues.  Many commentators believe that we are more likely to now have a ‘soft Brexit’, as many of the points to be negotiated will have to be made public whilst the Bill to enact Article 50 is being passed.

We will keep you informed of any developments.  In the meantime, if you require a solicitor to advise you on any elements of Brexit, please search for a specialist lawyer using Solicitors Guru today.