The decision in Aslam (and others) v Uber, decided last month has the potential to change much of the landscape surrounding employment law, bringing it up to date with the economic reality of the so-called ‘gig’ economy, that has been steadily growing since the 2008 financial crash.

What is the gig economy?

The gig economy comprises of workers who work a number of small jobs instead of in one position which comprises of a full-time position.

Instead of a salary, workers get paid for the ‘gigs’ they do, for example driving a taxi or delivering pizza.

Employers often use technology to update employees if there is a job available.

It is estimated that around five million people in the UK now work in the gig economy.

What are the advantages of being part of the gig economy?

Unlike zero-hour contracts, where an employee has to do the hours given to them, the gig economy provides workers with a great deal of flexibility.  Their earning potential is tied into the amount of hours they are prepared to work.

Employers also benefit as they do not have to pay staff if the work is not available and they are not tied into having to pay the costs associated with having permanent staff.

How are those working in the gig economy disadvantaged?

Those undertaking work in the gig economy are deemed self-employed, meaning they have very little legal protection.  They have no rights to holiday, sick, redundancy or maternity pay.

They are also not subject to the national minimum wage.

Why is the E 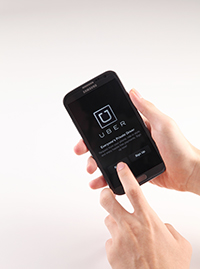 mployment Tribunal case on the employment status of Uber drivers so important?

Last month, a two Uber drivers argued in the Employment Tribunal that they were ‘workers’ and as such should be entitled to minimum wage and holiday pay.  They won.  Backed by the General Trade Union, the test case was seen as a landmark decision with Judge Anthony Snelson, who led the three-person tribunal panel, being sharply critical of Uber’s claim that its drivers are self-employed; “The notion that Uber in London is a mosaic of 30,000 small businesses linked by a common ‘platform’ is to our minds faintly ridiculous”, he wrote in the ruling.

It is believed the case will encourage other Uber drivers to bring claims, along with people working on other “gig economy” apps such as Deliveroo and Task Rabbit.

How has the UK government responded to the decision?

Prime Minister Theresa May has ordered a review of the worker’s rights saying she wants to be, “certain that employment regulation and practices are keeping pace with the changing world of work”.

What does the decision mean for Uber and companies working under a similar model?

Analysts believe that Uber, which is a Californian company, now has the demand and the infrastructure to absorb the cost of making its drivers workers rather than referring to them as self-employed.  However, other start-ups who are taking advantage of new technology to create app-driven businesses may find it more difficult to grow if they are required to formally recruit talent and pay minimum wage and holiday pay.

The decision is expected to be appealed by Uber.