The latest government statistics on employee pay reveal an 8.6% gap between men’s and women’s median hourly earnings for 2018, confirming that there is still a gender pay gap in the UK in 2019 that needs to be addressed. It would appear that employers are not quite doing enough to tackle the gender pay gap problem despite there being serious legal consequences for those that fail to meet their employment law obligations in this area. Employer obligations in relation to the gender pay gap mainly entail the duty to report gender pay gap data, but may also involve other concerns depending on the circumstances.

How is the gender pay gap defined?

This is an important definition because it helps employers to understand better their legal obligations when it comes to differences in pay between men and women. Indeed, obligations relate not to reducing the gap per se (although it is of course strongly encouraged and guidance is available) but rather to reporting what the gap is in their company.

What do employers have to report?

Reports consisting of relevant company data and a written statement must be made to the public through the company’s website and to the government through the online gender pay gap reporting service.

The written statement accompanying this data must confirm that the data is accurate, and it must be signed by an ‘appropriate person’. The appropriate person varies depending on the type of employer submitting the information, but usually is a director, partner, or the most senior employee.

If an organisation runs multiple payrolls (such as if a separate payroll exists for the accounting and operations departments respectively), then employers must merge all the relevant data so that they publish one data set for the entire organisation, not several data sets.

Do all employers have to report this data?

The regulations only make gender pay gap reporting mandatory for organisations with 250 or more employees that are based in England, Scotland, or Wales.

If an organisation has fewer than 250 employees, the employer may still report information on their gender pay gap, but the law does not yet require that they do so.

Who exactly counts as an employee? 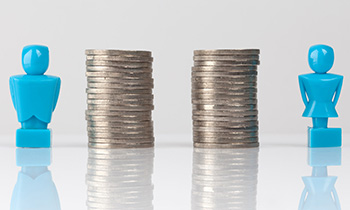 Employers will already be familiar with the fact that employees can, at times, be difficult to define under UK employment law.

For the purposes of gender pay gap reporting, the government advises that an ‘employee’ includes:

Employers should not report individual agency workers or individual workers from other service companies as those individuals will already be accounted for in the providing company’s own gender pay gap figures.

Part-time workers and those who work in job-shares always count as one employee for the purposes of gender pay gap reporting; this is so even if the part-time worker has only a few hours and even if there are several people in the job-share.

What happens if employers do not report gender pay gap data?

Throughout 2018, several major news stories broke around the gender pay gap in the UK.

Perhaps the most memorable was the BBC gender pay gap scandal. The BBC was engulfed in controversy when it published information on all those who were paid over £150,000 annually and it was revealed that of the 96 who did, only 34 of them were women and the top seven earners were all men. The consequences for the BBC in terms of public reputation alone were staggering.

But major stories also broke around the severe legal consequences for any employer that does not publish their gender pay gap information. Failing to report does not, after all, only make the organisation look bad (the implication being that it has something to hide by not reporting) but it also entails serious legal consequences that may include summary convictions, unlimited fines, and being forced to publish data under a court order.

Do employers have obligations to close the gender pay gap themselves?

As our guidance here has confirmed, most of those obligations relate to gender pay gap reporting, which allows the government to formulate stronger data-driven policies to address the gender pay gap at a macro level.

Yet employers still have obligations in regard to the actual amount they pay employees. The Equality Act 2010, for example, goes some way to addressing inequalities in pay between men and women by providing for a right to equal pay between women and men for equal work. Unlawful pay (paying men and women differently for performing the same or similar work) has in any case been illegal in the UK since 1970.

For most employers, though, their contribution to closing the gap will come from addressing structural issues within their organisation and ensuring that differences in other forms of employee treatment (for example, benefit schemes) do not inadvertently contribute to a gender pay gap. Advice in this regard is published by the government and if in doubt, employers should contact a qualified employment law solicitor for guidance.

For more information about the gender pay gap in the UK and to get detailed and specific advice on your gender pay gap obligations as an employer, find an employment law solicitor on Solicitors Guru today.