There are around 10 million dogs in the UK and most of them are well-behaved and safe around other people and animals. However, some dogs can behave aggressively, and may be seized by the police as a consequence. If you are an owner, having your dog taken away from you can be devastating. This guide explains the steps you can take to have your dog returned to you.

Why do dogs act aggressively?

Aggression is normal in animals, for example, cats hiss and scratch if they are frightened or annoyed, a horse will kick if startled.

Dogs behave aggressively when they are stressed or fearful because of:

What is considered aggressive behaviour by a dog?

Under the Dangerous Dogs Act 1991, any dog can be considered dangerous if they are not kept under control.  It is not necessary that they bite someone, they just need to behave aggressively in a way that makes someone believe they are unsafe around the animal.

What are my responsibilities as a dog owner?

Under the Animal Welfare Act 2006, all those who care for animals must meet their needs.  These include: 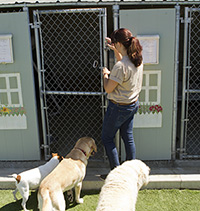 pen if my dog is seized by the police?

If you dog is seized by the police for aggressive behaviour, it will may be placed in kennels until you have appeared in court (depending on the seriousness of the circumstances) or they decide what further steps to take.

If your dog is placed in a kennel, there is a duty on the court to expedite the court process, for both the animal’s welfare and to protect the police budget.

Will my dog be destroyed?

Not necessarily, although if it has seriously injured or killed someone it is likely to be put to death.  If you are summoned to court because you dog was deemed to be acting dangerously out of control, you will need to prove that it is not a danger to public safety.

A good solicitor will help you construct a strong argument along these lines by demonstrating to the court that the dog has not shown aggressive behaviour in the past, and/or that you plan to embark on a vigorous training regime with a dog-training professional.

By running a search through our website you will be able to find the right solicitor to assist you in bringing your dog home.